McCarthy Tétrault is pleased to announce that Byron Shaw has co-authored the fifth edition of Constitutional Law, recently published by Irwin Law. The book’s co-authors are Patrick Monahan, the Deputy Attorney General of Ontario and Padraic Ryan. 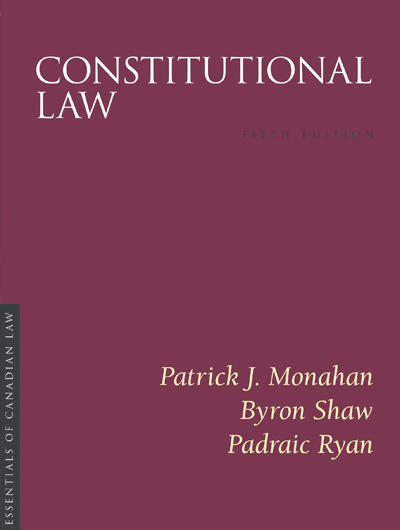 The fifth edition of Constitutional Law represents a significant update of the fourth edition, published in 2013. During this period, the Supreme Court of Canada has continued to develop the jurisprudence in all areas of constitutional law, including freedom of association, equality rights, Indigenous title, and inter-jurisdictional immunity.

As with earlier editions, the aim of this text is to provide lawyers, academics, and law students with a general introduction to, and overview of, the basic elements of the Canadian Constitution. The authors discuss issues in sufficient detail so that the book will be of value to lawyers who encounter constitutional issues in their daily practice. Constitutional Law has been cited with approval by provincial and territorial appellate courts, as well as by the Supreme Court of Canada.

Constitutional Law is available for purchase, as a paper book or e-book on Irwin Law’s website.